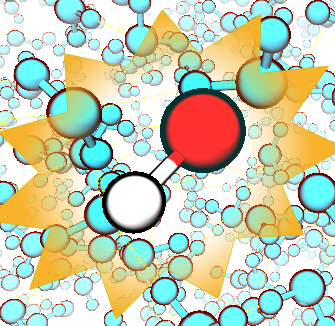 Radiation is a hazard to all living organisms, damaging cellular systems at the molecular level.  Much of this damage is not due to the direct impact of radiation on cells, but the interaction of radiation with water to produce reactive oxygen species that react with and degrade biomolecules.  Like tiny bombs, these small molecules diffuse through the environment until they are either intercepted and "defused' by antioxidants or specialized enzymes, or encounter and react with something else - and if that something else is an important protein or nucleic acid, the result can be harmful or fatal.

In extreme environments, however, radiation may have upsides.  In the deep cold of the outer solar system, radioactive decay may produce liquid water at rock/ice interfaces, or may contribute to heating in frigid sub-surface oceans.  In such inhospitable environments, life could potentially exploit microenvironments carved out in part by the heat of radioactive decay - if it can deal with the ever-present threat of radiation-generated reactive oxygen species.

Understanding the adaptations required to survive in such environments requires us to know how reactive oxygen species - those "tiny bombs" - diffuse, under conditions that are very different from those we see in our everyday lives.  Freezing cold and crushing pressure can alter the behavior of water itself, changing the way that particles move and altering the rates of reactions that living systems need to stay viable.  In work published in the Journal of Chemical Physics, NCASD Lab PI Carter Butts and colleague Rachel Martin probe this question, using a combination of statistical modeling and atomistic molecular dynamics simulation to examine the diffusion of the primary product of radiolysis of water - the hydroxyl radical - under conditions of low temperature and high pressure.  At the pressures believed to be present in the deep oceans of outer solar system moons, water remains liquid at much lower temperatures than on the surface of the Earth, but also becomes more viscous.  Changes in the local dynamics of water molecules slow the hydroxyl radical even more than the water itself, resulting in a decreased relative diffusion rate that appears to stem from a decline in the creation of tiny "cavities" into which the radical can insinuate itself.  With fewer opportunities to move into new cavities, the radical winds up confined for longer periods, even as water molecules change places around it.

In addition to shedding light on how hydroxyl radicals diffuse under extreme conditions, this work also introduces new statistical strategies for more efficient estimation of diffusion rates from molecular dynamics simulations..  These are potentially useful for studying phenomena such as the diffusion of drug molecules, where computational savings translate directly into the ability to screen larger numbers of candidates, or for situations in which precise estimates are needed on a limited computational budget.  As this research illustrates, our quest to understand the molecular constraints on life in the cosmos has tangible benefits for life here on Earth.

This work was funded by an award from the NASA Exobiology program.